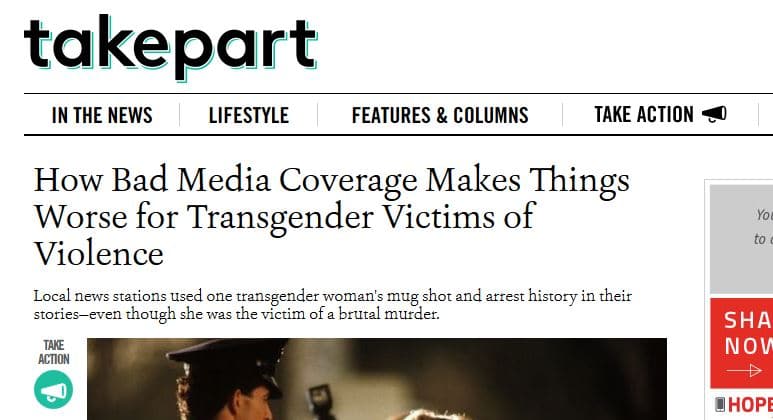 Local news stations used one transgender woman’s mug shot and arrest history in their stories—even though she was the victim of a brutal murder.

By Nicole Pasulka – Nicole Pasulka is a writer and reporter who lives in New York City. Her work has been published at Mother Jones, Buzzfeed, The Believer, and New York Observer.

On June 26, a 28-year-old transgender woman named Tiffany Edwards was shot and killed by Quamar Edwards (no relation) in Cincinnati.

She was the fourth transgender woman to be killed in Ohio over the past 18 months. Nationally, trans women—in particular those who are African American and Latina—are victims of violence at an alarming rate. Of the 18 bias-motivated murders of LGBTQ people last year, three-quarters of the victims were transgender women.

But local media in Ohio didn’t mention these statistics when reporting on Edwards’ death. Instead, when telling the story, news stations identified the murder victim by her birth name and showed her mug shot from a previous arrest.  Full Story >>>

The Premier Florida Conference for Substance Use ...